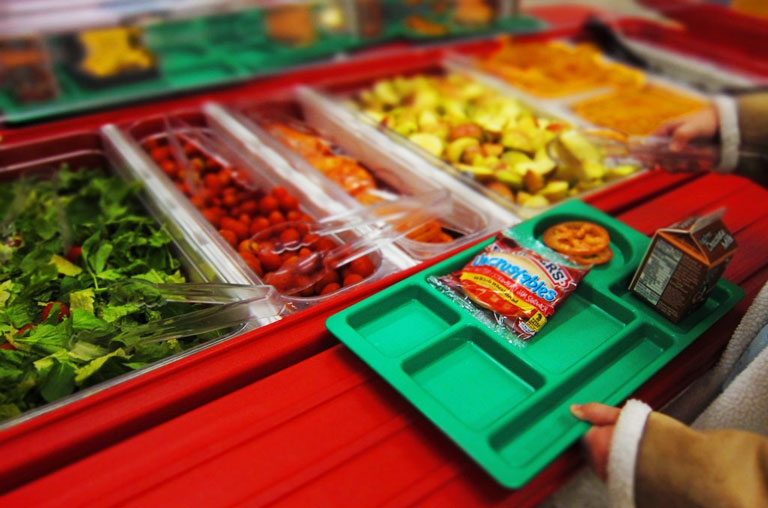 This is the first of two posts on institutional cooking.

People who cook for large groups do not get enough respect. In our deeply problematic classification of jobs in this country, cooking for large groups is considered “unskilled” labor – whereas somehow moving imaginary quantities of money is considered “skilled.” (Capitalism is really absurd at times.) Cooking may be a menial, manual labor, but it is a labor that requires deep skill – especially when you are turning out food to feed a hundred, a thousand, ten thousand. When you are cooking in a complex institutional setting, it becomes a skill of almost super-heroic proportions.

I and friends have learned this truth the hard way by wandering into occasional institutional-size cooking gigs ourselves. Back in my college days, I somehow ended up cooking lunch a few times for a small, lovely Lutheran church near my campus. Cooking lentil soup and pasta for ten people is a fairly straightforward matter. Cooking for a congregation of over one hundred is a much different undertaking, and after a few hours I found myself completely, utterly exhausted. The fatigue came not just from the physical labor, but from the mental labor of working with much larger quantities, having to adjust my normal cooking habits to the huge quantities I was making, and learning how to work with a soup pot large enough for a small person to fit inside. (I discourage cannibalism.) Other friends have come to dread “cooking duty” in the Israeli, South Korean, or Finnish Armies, which thrusts one into a context where one has to go from zero to feeding a hungry platoon on often substandard ingredients fairly quickly. It is an egalitarian approach to push everyone through the hard labor of large-scale cooking. In another context, I have watched friends spend hours as the institutional mashgiach (kosher supervisor) for college Shabbat dinners, supervising large quantities of food for halachic minutiae. Many of my friends and relatives lived (and some still do) on kibbutzim in Israel that had huge, communal dining halls of varying quality. And of course, there have been the other encounters: helping friends navigate hospital food systems, reading about the unionization of cafeteria workers, and the flurry of articles last year about kashrut in the American prison system.

I have been thinking about institutional food for a while, and how it affects the way we approach and think about food. When I say institutional food, I am referring to food cooked as part of a wider institutional framework not primarily focused on food. These institutions include school and college cafeterias, nursing homes, armies, prisons, hospitals, and places of worship. Institutional cooking, in my mind, has two other defining characteristics. One is that such cuisine is generally made for large groups – institutions provide for the needs, food and otherwise, of hundreds or thousands of people on a regular basis. Those people have a variety of needs and preferences, allergies and aversions, practices and metabolisms, which compounds the challenges of cooking, already made difficult by the scale of the endeavor. The other defining aspect is that institutional cooking has a certain industrialization or standard process to it – necessary to even cook at that scale. Though we often think of processing and industrialization as a modern endeavor, the idea of producing rations in a standard way for many institutions dates back centuries, to madrassas in the Ottoman Empire, monasteries in Western Europe, and armies the world over.

I am only offering some thoughts here. I am a civil servant who does food history as a hobby, and there are many people who have built a career out of studying institutional cooking, not to mention the multitude of institutional cooks themselves. (“Nothing about us without us” should also apply to discussions of labor.) These thoughts are essentially evidenced ideas about how Jewish food and institutions intersect both at the individual level and at the systems level. At the end of this, I will cite some things that you should read, whose have informed my thoughts.

And why does institutional food matter?  It is tempting in our craft-addled food culture to forget that institutional food is real food with real influence on the way people eat, what people think of as “good” or “bad” or “normal food, and how people approach the labor of food at all. Many assume that craft culture, with its (expensive, anachronistic, and white) renditions of (often normally inexpensive and created by people of color) “real food” influence people the most. Certainly, it is an influence. But unless you are incredibly rich or have an incredibly unusual upbringing, much of the food you will eat during your most formative life phases in North America, Europe, and Israel is institutional. Cafeteria food at schools, universities, and army mess halls, food at synagogues and churches, food from mass kitchens if you are hospitalized or imprisoned. Tastes are formed by the often-“disappointing” preparations of certain ingredients, and other dishes are looked forward to on a rotation. When many students graduate to cooking on their own, the reference points for a normal meal have been shaped not just by food at home or out, but by years and years of institutional food. Jewish communities, with their own schools, hospitals, yeshivot, synagogues, and institutions – and not to mention kashrut practices and traditional foods – are no exception. Even craft culture imitates the food of institutions and seeks to influence it.

With these ideas in mind, I will now go through a few small discussions of institutional food. Keep in mind that these are brief and extremely incomplete, each of these seven points could be the topic of a doctoral thesis on their own.

Tam ve-nishlam, here is the end of my scattered thoughts on institutional food. Two more notes:

First, look out for an upcoming post about readers’ memories, thoughts, and anecdotes on institutional cuisine. I have heard some wild stories, and personally seen a few myself. The tales range from gross and unappetizing to delicious and heartwarming. I have never been so excited to write a post.

Secondly, I am going to ask you, as the reader, to do a bit of thought. How have you interacted with institutional food – as an eater, as a worker, as an employer, or in other ways? What carries over into your home cooking, into restaurants, and into your food preferences? And how do you relate to the people who do the labor of institutional cooking and food supply – or not?

Some resources on institutional food:

A New Look at Institutional Food Service Management, by Mickey Warner – from 1992 but still very apt

The School Food NYC site is fascinating as an example of how people interact with cafeterias: http://www.schoolfoodnyc.org/public1/default.aspx?logout=1

The Centers for Disease Control has a well-written report on making hospital food healthier, although the document itself violates several national accessibility laws: https://www.cdc.gov/obesity/hospital-toolkit/pdf/creating-healthier-hospital-food-beverage-pa.pdf

The Guardian did a great photo series on the good, bad, and gross of hospital food: https://www.theguardian.com/commentisfree/gallery/2015/mar/04/your-pictures-of-hospital-food-good-bad-ugly

Food in the prison system:

The Atlantic did some incredible work covering food safety in the prison system here: https://www.theatlantic.com/health/archive/2017/12/prison-food-sickness-america/549179/

The New Republic makes some great points about the way kosher food acts as a point of rebellion in a horrific prison system: https://newrepublic.com/article/116295/prison-food-form-rebellion

More than slightly related: you should listen to Episode 2 of the podcast Farm to Taber to learn about unpaid prison labor and all the problems that come with that on farms, for the human rights of prisoners, and how institutions interact with our food system. Dr. Sarah Taber is awesome, too.

View all posts by Jonathan Katz