There are some Ashkenazi Jewish dishes that I can easily explain to people who are not familiar with that style of cooking. Kneidlach are a classic case of “carbs in soup,” latkes are giant hash browns, and even p’tcha is a sort of 1950s aspic, but far older. (And generally tastier.) Cabbage soups make sense in many cultures, as do soft and sweet breads like challah. But then there are the ones that find confusion among Americans – the pickled herring and poppy seed filling, for example.  But none have caused quite as many perplexed looks as kasha varnishkes – roasted buckwheat groats with noodles.

“What is buckwheat?” “Is that a health nut thing?” “You eat grains with noodles?” 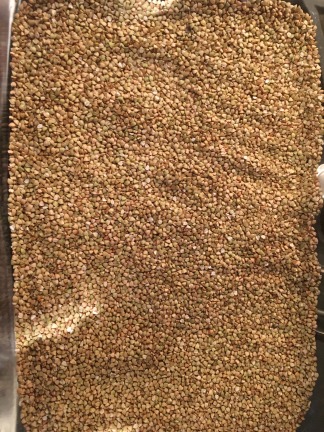 Kasha varnishkes is a delicious dish – nutty and savory, with hints of carbohydrate sweetness and a touch of tannin from the buckwheat. Though it has dropped off the mainstream radar in recent years, other than a reference in Seinfeld, it is still a treasured treat for many Jews. The dish itself has a fascinating history. Kasha, or buckwheat, has been present in Jewish cooking since the 12th century, when Mongol and Tatar invaders introduced buckwheat to Eastern Europe from Siberia and China. The plant – grain-like, but botanically not a grass like wheat – was well-adapted to the climate of northeastern Europe, and quickly became a mainstay of the local diet. The groats were usually roasted for better flavor, easier digestion, and longer storage time – roasted groats can keep for months in cool and dry spaces. Kasha varnishkes initially began as vareniki, or pierogi, stuffed with buckwheat. However, the dish soon became buckwheat with onions and strips of pasta, which skipped the laborious process of stuffing the dumplings. In the United States, the recipe then became popular with bowtie pasta, made initially in imitation of the Italian farfalle. Today, kasha varnishkes is almost always made with this pasta. 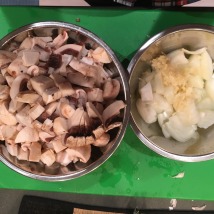 Salt and pepper to taste

*Some people claim that coating the groats in beaten egg helps them not to stick together. I counter that if your buckwheat is too sticky, you have added too much water. Besides, fluffing with a fork is a very easy way to fix this problem.

Thank you to Ziva Freiman for participating in User Acceptance Testing for this recipe.

BONUS: For another great variation on kasha varnishkes, check out The Gefilte Manifesto‘s version with crisp Brussels sprouts!