Lentil soup is one of the oldest Jewish dishes – it is probably the “pottage” mentioned during the story of Esau and Jacob in Genesis, and we have recipes from ancient Greece that may date back as far as the second millennium BCE. It has remained a “classic” – and one that I was recently asked to make.

The question became then, what style do I use? Until recently, lentils were viewed as a food of mourning and famine in the Ashkenazi world, and were thus disdained until the early 20th century – though by 1938, when Fania Lewando’s vegetarian cookbook in Yiddish was published, lentils were common enough in Lithuania to appear in several recipes. A soup recipe was among them. In the Sephardic and Mizrahi realms, however, lentils were an everyday, quotidian, and celebrated food. The lentils used in the Mediterranean – and in Claudia Roden’s Egyptian recipe – were red, but brown and green lentils are more common elsewhere. And, of course, seasoning differed across the Jewish world – as well as the carbohydrate or presence of meat or dairy in the soup. There are as many Jewish lentil soups as Jewish communities.

I recently made my own lentil soup – a throwback to my grandmother’s recipe, but with more vegetables and a slightly sharper flavor than her very meaty and saltier soup. This soup is probably closest to a French lentil soup, but with Palestinian seasoning. I used the green lentils common in France, along with the very Nordic split peas and leeks in the place of onions. Leeks go well with lentils: their sharpness and vegetal flavor balance out the lentil’s starchy meatiness. Meanwhile, the sumac and za’atar add a pleasant bitterness to the soup – and the fenugreek adds an irresistible aroma. 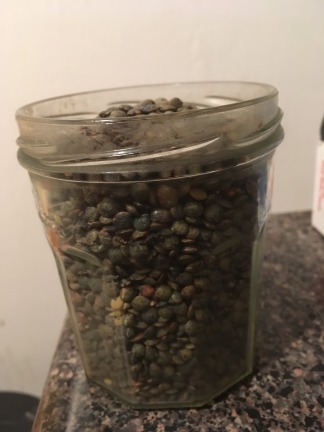 Sauteing the leeks and tomatoes. (Photo mine, December 2016)

Vaguely based on the recipe of Esther Katz

1 tablespoon vinegar (rice wine or apple cider should do)

13oz/370g canned diced tomatoes (about one medium-sized can)

3 cups vegetable stock (you can use water)

Salt and pepper to taste

Thank you to Jay Stanton and Julia Clemons for participating in User Acceptance Testing for this recipe.

One thought on “Lentil Soup with Leeks and Split Peas”