Mention Shavuot to a Jew in the United States or Canada, and their first response is often “cheesecake.” The holiday associated with dairy foods has now become, for many, only associated with a creamy concoction of cheese, eggs, and sugar, soft and yet mysteriously solid. In fact, I’m pretty sure that for many American Jews the cheesecake on Shavuot matters more than the important event the holiday actually celebrates: revelation. This connection may seem modern, but – as I noted in my last post, when I made cheese and talked about dairy on Shavuot – dairy and this holiday have a long history together, and cheesecake and Jewry also have a long and delicious relationship.

Cheesecake has a long Jewish history spanning the Ashkenazi and Sephardi worlds – in fact, the longest of any recipe yet profiled on the blog. In Ancient Greece, combinations of flour, fresh cheese, and honey were baked and dried; this recipe was likely known in the Holy Land. (The Priestly Source may himself have eaten this.) Similar desserts were eaten across the Roman Empire, probably including by those Hellenized Jews who sought to assimilate into access to imperial power. Later on, Jews settled in many cheese-eating parts of the world: and so you ended up with Italian Jews making ricotta-based cheesecakes (more on that later), and Ashkenazi Jews – as Claudia Roden notes in her book – absorbing and reimagining the cheesecakes of their non-Jewish neighbors. English Jews before the expulsion of 1290 probably made a cake like the sambocade found in medieval cookbooks; medieval Spanish Jewry probably ate cheesecakes not unlike the quesada pasiega (video in Spanish) still common in Spain today. By the 19th century, cheesecakes were popular Shavuot and festival dishes in many places of the Jewish world.

Cheesecake is now considered in many places a “Jewish” food. In Rome, the traditional ricotta-based cassola  and crostata di ricotta (video in Italian) are both recipes that originate in the Jewish quarter of that city. The recipe is based on the Shavuot and Sabbath delicacies of the Sicilian Jews that arrived in Rome after being expelled from their home island in the fifteenth century. Today, the Jewish cheesecake has become a Roman Christmas tradition, one that has even attracted the attention of the New York Times. Across the ocean, in New York City, Toronto, and Montréal, the cream cheese-based cheesecake of North American Jewry is considered a “Jewish” food of the first order – and in the rest of the United States, “real” cheesecake is often “New York, and Jewish.” Indeed, as Joan Nathan notes in Jewish Food in America, cheesecake was first popularized in the United States by Jewish delis in New York.  (In college, the first question one non-Jewish friend asked of me, when he learned I was Jewish, was for a cheesecake recipe.)

For this recipe, I made a simple ricotta cheesecake with an almond base, using the homemade cheese I made for the last post. Of course, you can also use store-bought ricotta and/or quark cheese. One of the great things about ricotta cheesecakes or quark cheesecakes is that you don’t need to have a water bath for them, as you do for the far more delicate cream cheese-based cakes common here in the United States. This means that the recipe is both far quicker to make, and far easier – especially for beginning cooks. The recipe here resembles in some ways the ricotta cheesecakes from Italy I mentioned earlier, and in some ways the quark-based Käsekuchen or sernik common in Germany and Poland. Perhaps it also resembles the cheesecakes of pre-war, pre-Holocaust Lithuania – Fania Lewando’s recipe also uses farmer’s cheese (tsvorekh). The innovation I made is using an almond base. Not only does this provide a wonderful nutty counterpart to the light, sweet cheese – with which the almonds meld wonderfully – but also makes the cake gluten-free. Feel free to make a dough or biscuit crust, like that in the Baked Apple Pudding, but the almonds really do work. 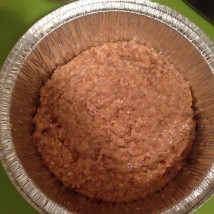 Putting down the base…

…baking and maybe I added a preserved fig because yum. (Photos mine, June 2016)

Ricotta and Quark Cheesecake with an Almond Base

1-1 1/2 cups fresh quark cheese (you can also use ricotta only, it should add up to three cups of cheese)

Butter for greasing the pan.

(Author note: for a thicker base, use 1/2 cup of almonds and a tad more butter and sugar.)
If you are using a dough base, cover the bottom of the pan with a layer of dough of about ½ an inch thickness.

One thought on “Shavuot II: Cheesecake!”