Ah, German and Austrian pastry. I claim that the main reasons I am learning German are its usefulness in researching Jewish history (and delicious food), my own heritage, an interest in trains, and the stunning beauty of the language. But I cannot deny that the wonderful pastry traditions of the German-speaking world – anthologized beautifully in Luisa Weiss’ Classic German Baking – is a very key draw for me to the stringent cases, bizarre genders, and complex plurals of die deutsche Sprache. The German-speaking world is particularly famous for its elegant cakes, buttery-creamy pastry, and the oh-so-wonderful delights of nutty and tart flavors combined with the sweet, heady rush of sugar. By this world of pastry and cake I am well and truly smitten – or, perhaps to be more appropriate for the topic of this post, ich bin sehr vernarrt! A man who can make me a perfect Pflaumenkuchen or Lüneberger Buchweizentorte will not only receive an instant marriage proposal from me, he will also have proven himself instantly adept at Jewish food. What more could I ask for?

German pastry, despite its exterior appearance, is also a deeply Jewish tradition. Many of the earliest Jewish cookbooks from the late 19th century were published by and for German Jewish communities in der Heimat and abroad: Milwaukee to London to Cape Town. The recipes within them include the cakes and pastries that differed by region but not ethnicity or religion in their homelands. One could learn to make an apple cake, a buckwheat cake, a Streuselkuchen or  Dampfnudeln from these cookbooks. Some were Jewish specialties – such as the doughy potato-based Berches bread – and some were not. Many of these recipes were shared with other Ashkenazi communities – among them the Austrian and Bavarian strudel and recipes filled with poppy seed or almonds. In the United States and Canada, the popularity of German pastries became so ingrained in Ashkenazi Jewish communities that their origins as German and/or Austrian – and not necessarily specifically Jewish – were forgotten. (Many of my New Yorker friends are surprised to learn that non-Jews eat strudel!) In Israel, meanwhile, German bakers who arrived before the establishment of the State began a proud baking tradition that continues to this day. The recipes still do not differ that much from their butter-laden German counterparts, other than the occasional substitution of dairy ingredients.

The pastries are also delicious – like this poppy seed cake, filled with a variant of my beloved mohn. The nuttiness and timbre of the poppy seeds balances with a dense, doughy pastry and the sugar throughout to bring your taste buds on a very pleasant journey. Now, this poppy seed cake is not technically “Jewish,” but it is so very Jewish. Poppy seed pastries are deeply traditional – just think of hamantaschen! – in the Ashkenazi world, and I have seen similar recipes to this one in several Jewish cookbooks. In addition, poppy seed is a popular filling for the cake known as babka – which, though differently shaped and yeasted, is not dissimilar in final product to this cake. Not to mention that many babkas are also covered in streusel! In any case, this cake would be readily recognized as an Ashkenazi one at many a synagogue potluck.

Based on the recipe by Felice Forby 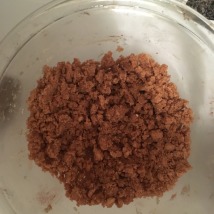 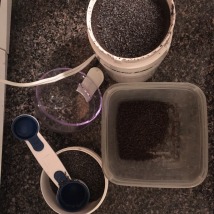 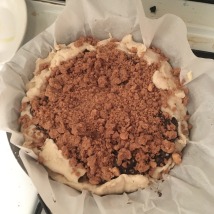 Thank you to Yael Shafritz, Aaron Marans, Alex Roesch, and Yonit Friedman  for participating in User Acceptance Testing for this recipe.

We never celebrated Purim much when I was a child. On years when there is only one month of Adar – the month that Purim is in, which is repeated in leap years – it was the yahrzeit, or death anniversary, of my maternal grandmother. That said, even without the somber occasion, Purim was a bit too…gaudy for my understated parents. The holiday celebrates the redemption of the Jewish people in the Persian Empire from the machinations of the evil Haman, as narrated in the biblical Book of Esther – named after the heroine of the tale. Historically, this has been a day of much celebration and much drinking. Yet this has somehow morphed in the modern era to a day of mandatory fun masked as chaos, complete with costumes and a lot of yellow. My father hated chaos, my mother hated yellow. Purim was not really a thing in our house.

One memory does stand out from Purim though: poppy seed hamantaschen. Fluffy, triangular cookies, sweet – but filled with the nuttiest, most beguiling poppy seed filling on the inside. I was hooked. Even as my peers went for chocolate chip, apricot, or sprinkle-flavored hamantaschen, I stayed loyal to the poppy seeds. Which, in some ways, is in keeping with history.

Hamantaschen  come from the intersection of Jewish folklore and European pastry. On the one hand, filled cookies – and especially those with poppy seeds – were common in the medieval Europe where Ashkenazi cuisine developed. On the other hand, there is the command to simultaneously obliterate the name of the evil Haman (and, metaphorically, Amaleq) while remembering what he did! At some point, the cookies, which may have been called Mohntaschen in German (poppy-pockets) became Haman-tashen, Yiddish for Haman’s pockets. And thus the humble hamantasch was born.

Makes about two cups (I usually make a double batch)

2 tbsp shlivovitz or other brandy

*Author’s note: though it is traditional to grind the poppy seeds, I actually prefer to leave them whole – it adds a wonderful nutty flavor to the filling.

Have some filling on hand – look above for a mohn recipe. I also recommend a good, thick jam. Such as my quince jam!