Rosh HaShanah is coming up, and with it, hours upon hours of cooking in Jewish households across the world. The Jewish New Year is a traditionally a time for much feasting and many dishes, and is more generally two days of deliciousness. Over the next few weeks, this blog will feature a few recipes common to Rosh HaShanah and the subsequent holiday of Sukkot.

One of the “classic” dishes in the Ashkenazi tradition is cabbage with apples. It is made from simple, accessible ingredients, and exhibits the sweet-and-sour combination frequently found in much of Eastern European Jewish cuisine. Though not as celebrated as chicken soup, kugel, or even tzimmes, the dish is a recognizable one for many Ashkenazi families. Similar recipes exist across Central and Eastern Europe – from Hungary to Germany to Finland. Cabbage, after all, was a winter mainstay for centuries in this part of the world. The combination is so common, in fact, that it is apparently referenced in a video-game called Skyrim. (I ask my readers who are gamers to confirm this.)

Hundreds of variations of this dish exist. Even within my own family, three generations disagree on what best constitutes this dish. My grandmother’s recipe has a strong taste of caraway; my mother prefers the dish without any caraway. I myself the additions of both caraway and garlic for a more pungent final product. Others use pepper and vinegar for a sour taste, or raisins for a sweeter one. Across the variations, however, a sweet-and-sour taste is maintained.

On a recent trip to Atlanta, I found a most interesting cookbook in a secondhand bookstore: the 1973 cookbook of the employees of the Metropolitan Museum of Art. The book itself is beautiful, and provides a really great insight into what the intellectual class of the 1970’s liked to eat. Some of the recipes are quite quaint to American readers nowadays – think “molded rice” and other wobbly “salads” – and many are quite familiar, such as the Korean Spinach Soup. Yet others are extremely complex, and generally of Continental European origin – even including the infamously difficult Sauerbraten. Among this cornucopia of recipes, I found a not unfamiliar – albeit not kosher – recipe for red cabbage! It is said to be a Hungarian recipe. This version is unusual, however, in that it uses pears, which makes the final product far sweeter. “Sweet and sour” indeed! 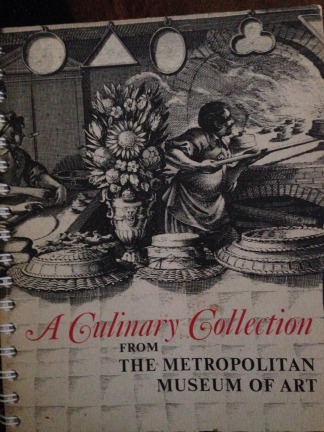 The 1973 “A Culinary Collection From the Metropolitan Museum of Art.”

The red cabbage recipe, by Janos Schulz and Linda Gillies. (Contact me if you would like a transcription.)

I provide my somewhat more garlicky recipe here. This recipe is based on my grandmother’s, which was very heavy on the caraway – a taste, though welcome, which can become quickly overpowering. The garlic and caraway balance each other out well.

Based on the recipe by Annushka Smit Freiman

2 tablespoons butter or a vegetable seed oil, for frying

*If you are so lucky as to have access to Bramley cooking apples – which are easy to find in the United Kingdom but not so much in the United States – you can use one of those large ones instead.

Thank you to Alex Cooke for participating in User Acceptance Testing.